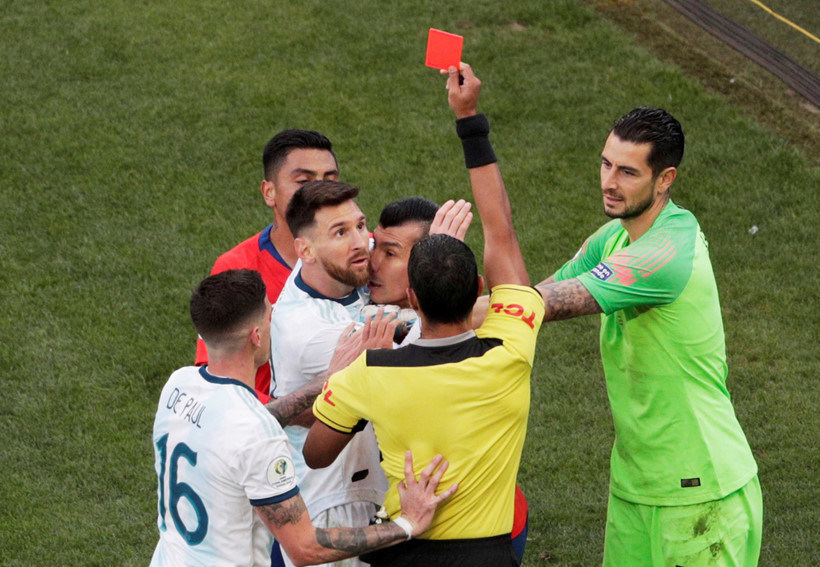 Famous for being a gentle star on the pitch, this was only the second time in his career Lionel Mesi had to receive a red card. The first time was 14 years ago.

In his entire career, Messi has only had to get a red card twice and that is all in Argentina shirt. 687 games for Barca, Leo did not have to leave early, but 136 appearances for Albiceleste he had to do this twice.

The first time Messi had to receive a red card was on August 18, 2005, during the friendly match between Argentina and Hungary. That is the debut match for La Pulga. He only appeared on the field for 40 seconds before knocking down the opponent because he kept grabbing his shirt.

14 years after that sad memory, Leo quietly left the field. He is now Argentina’s captain, the brightest star of Argentine football at the moment and one of the greatest players in football history.

The one who makes Leo receive a red card is Gary Medel. After a dispute, Messi and Medel rushed into each other as if to “eat and swallow” the opponent. Referees of Paraguay decided to withdraw the red card to chase both after referring to VAR.

It is noteworthy that Medel and Messi had a big impact on the Copa America 2015. In that match, when Leo was leading the ball away from Chile’s goal, Medel rushed into the foul and made 10 of Argentina rolled painfully. That year, Chile defeated Argentina after the shootout.

Talking about the red card in the Three-quarter match in the Copa America 2019, this seems to be the decision of the referee Mario Diaz de Vivar heavy hand.

During his career, Messi had to receive about 12,000 kicks from his opponent and he rarely reacted fiercely. However, as long as Leo resisted, he immediately had to receive a red card. Perhaps also because he is so famous.