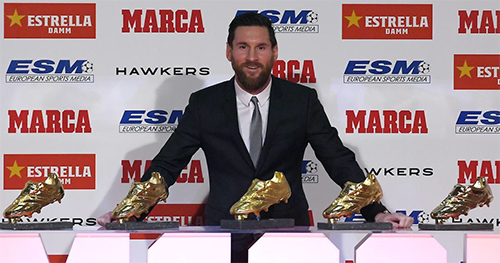 Lionel Messi finished the season from last week, with 36 goals for Barca in La Liga. At that time, he had four more goals than PSG Kylian Mbappe striker – his closest competitor in the race for Golden Shoe.

The French striker still has a game in Ligue 1 – a match against Reims in the curtain-down round of the season on May 24 – to feed the hopes of catching up or overtaking Messi. However, Kylian Mbappe only scored one goal in this match (PSG lost 1-3) and finished with just 33 goals. Messi thus won the Golden Shoe with three more goals.

This is the third year in a row and the sixth time in his career Messi has won the competition for the best goalscorer in European national championships.

With six titles, Messi is the owner of the most Gold Shoes. Cristiano Ronaldo came in second, with four times having the award which established since 1968. Legends like Eusébio, Gerd Müller, Dudu Georgescu, Fernando Gomes, Ally McCoist, Mário Jardel, Thierry Henry, Diego Forlán or Messi’s current teammate Luis Suarez have both just won the Golden Boot.

Messi is the second oldest player to win Golden Shoe, receiving this season at 31, 11 months, and 25 days. Hugo Sanchez over a month and a day old compared to Messi, when he received Golden Shoes in 1990.

However, despite winning the personal award, Messi is still unhappy, admitting himself to be obsessed for losing with Barca in the Champions League semi-final. Messi and his team-mates beat Liverpool 3-0 at home in the first leg, but lost 0-4 at Anfield in the second leg and lost the final.

“I don’t think about Golden Shoe. This award is not in my mind. We, or at least myself, are still suffering from defeat at Liverpool’s hands,” said Barca captain striker yesterday after winning the Golden Shoe.

Messi also warned his teammates that the season would end even worse, if Barca lost to Valencia in the King’s Cup final today. “This is the final, and if we don’t win, it will make us feel worse.”