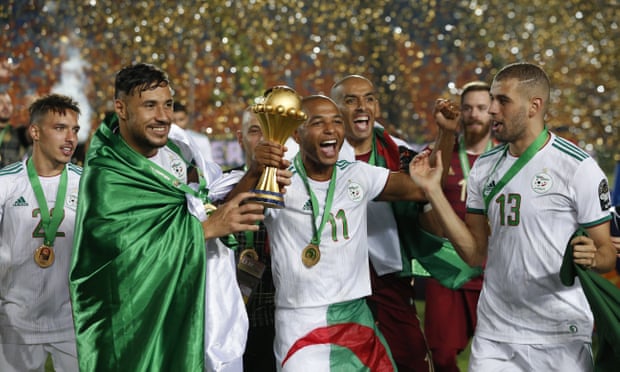 The team of Riyad Mahrez lowered Senegal 1-0 in the Afcon final, on the field of Cairo (Egypt) on July 19 evening.

The only goal of the match came in the second minute. Baghdad Bounedjah finishes off the goal. The ball touched Senegal defender’s feet and flew upright to form a tree, before going into the high corner of the goal, causing goalkeeper Alfred Gomis to stand and watch.

There was an early opening score, Algeria “set up a double-decker bus” for the rest of the time to protect the result. They held the ball 38% and did not once finish more towards Senegal goal. Whenever there is a ball, the white shirt team always passes long distances and limits the formation. When losing the ball, Algeria actively foul from a distance that makes the opponent almost impossible to reach the goal.

The Afcon 2019 final is not as attractive as expected, partly because Senegal played under strength. On the day the number one star Sadio Mane disappeared, Aliou Cisse and his teachers did not have many options to attack, in addition to putting the ball in two wings and then knocking it into the penalty area. Algeria guessed this idea, put two little wingers up high, and made a total of 34 times in 90 minutes. 30 times of these took place in two corridors, and 19 times succeeded.

Senegal’s best chance came from M’Baye Niang’s effort in the 38th minute. The Rennes-based striker managed in the right corner, then broke into the penalty area before firing a left-footed shot. The ball swirled, aiming at the high angle of the goal, going close to the junction between the horizontal and vertical beams.

60 minutes, Adlene Guedioura hand touch in Algeria penalty area. The referee, Neant Alioum, gave Senegal a penalty, but changed his mind after using VAR technology. Guedioura closed his hands and did not make mistakes. Senegal continuously increased its firepower during the last 30 minutes of the match but could not have a goal and accepted a second defeat in the Afcon final.

For Algeria, this is the second time they won Africa, after the first in 1990. In addition to the cup, the North African team also received two individual prizes, the best Player of the Year for midfielder Ismael Bennacer and the best Goalkeeper for Rais Mbolhi.